Now that I’ve had a chance to reflect and come down off the natural high I experienced on Sunday, I can fill you in on the magic. As soon as my dad and I were dropped off about a block away from Canada Hockey Place, you could instantly feel the energy. There were Canada jerseys in every direction you looked. It was a beautiful day in downtown Vancouver with the sun shining and not a cloud in sight. Walking to the venue, there were chants of “CAN-A-DA” and people spontaneously singing O’ Canada. The feeling that I had is nearly impossible to explain.

Once inside, we made our way to our seats. Our seats were in the USA zone for the 1st and 3rd periods, in the first row of the upper level. We watched the Canadians and Americans warm up. The energy only began to build at this point.

The time we had been so eagerly awaiting had finally arrived! As the Canadians came out of the tunnel and stepped on the ice, the sea of red and white erupted. Wow!

Unfortunately, the Americans scored in the first minute and from then on, the Canadians never got the lead. For me and my dad it was about the experience more than anything (not to say a win wouldn’t have been appreciated). For the entire duration of the game the crowd was electric and it just intensified. The Canadians did end up losing 5-3, but it was a hell of a game that I’ll never forget. It was such a pleasure to be able to experience this event with my dad.

After the crowds cleared a bit, we made our way to the SkyTrain to get back to Coquitlam.

My dad and I experienced the Men’s 1500m Speed Skating event on Saturday at the Richmond Oval. What a beautiful venue! For such a large and cavernous building, there is remarkably no echo. The roof is made from the wood salvaged from the Pine Beetle infestation.

Unfortunately, we didn’t witness a Canadian win a medal. Nonetheless, Speed Skating is quite interesting and VERY fast. During the ice resurfacing a traditional Dutch band played, called Kleintje Pils.

There were 19 races with the Netherlands capturing the gold. Even though Canada didn’t win a medal, whenever they raced the crowd went nuts.

So after a bit of disappointment with not being able to go to Cypress Thursday for halfpipe we were in Whistler Friday for the skeleton medal races!  Unfortunately as a result of all this WICKED spring weather we have been having the standing room at Cypress for 8 of the events has become unsafe and tickets were canceled.

Friday started with a 2 hour bus ride from Vancouver to Whistler with blue sky and sunshine.  We then had a short time to wander around the village, where people were sitting out on patios enjoying lunch and the day.  It was from there onto a gondola and up the mountain to the sliding centre.  After a security check, where i neglected to remove all metal objects and was subjected to a full pat down which held us up slightly, Mom and I trekked to the top of the track and from there saw the final run of the woman’s skeleton.  From the grandstands up there we were able to see the sliders push off and watch the rest of the run on a big screen.  The vibe at the top was loud and great!!

We stayed up at the top for the men’s 3rd runs which ended with our Canadian, Montgomery, sitting in second!  We then  made our way down the mountain to find some food before parking ourselves at the last turn, number 16, for the final runs!

The men were quick and hugged tight to the walls, which seems to be at 90 degrees, doing 145km/hr!  The 3rd last slider from Latvia posted a very good time and moved into first.  Montgomery then went, beginning the run behind but picking up speed on the way, at the last time check he was only 7/100ths of a second behind.  The crowd cheered in anticipation and then erupted when hearing that he had taken the lead by 8/100ths of a second!  This left the final slider, from Latvia as well, whom had a good run but not enough to take the top spot.  At this point everything went crazy and what a moment it was to be part of!  Nothing like we have ever felt before!

That energy was then carried into the village where we watched the Fire and Ice show in the square, which had a DJ spinning, dancers with fire sticks and skiers and boarders doing jumps through rings of fire.  Pretty good way to end the night. 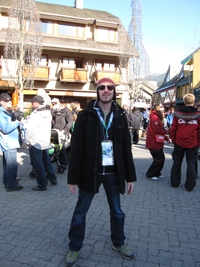 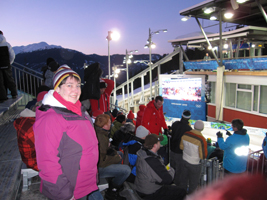 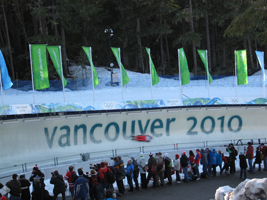 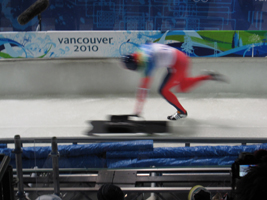 I just got home from the Pacific Coliseum from watching Short Track Speed Skating with my dad, our first event at the Olympics. I think only one word can explain what I just experienced: AWESOME! The crowd was alive and energetic the entire time. I truly felt a sense of passion and patriotism. Whenever a Canadian was announced and raced, the crowd was deafening. We were fortunate enough to witness a Canadian, Marianne St-Gelais, win a Silver medal this evening in the Ladies’ 500m. I can’t wait for more!

Canada wins a GOLD! We got our very first gold medal on home soil on Sunday by Alex Bilodeau in Men’s Moguls. The monkey is off our back now, time to get some more. We also recieved a Silver in Women’s Moguls and Men’s Snowboard Cross, and a Bronze in Women’s Speed Skating.

Last night’s concert Chris & I went to was great. We saw City and Colour, otherwise known as Dallas Green. The concert was part of the Cultural Olympiad. The opener was a band called The Rural Alberta Advantage. Both of us quite enjoyed them.

Unfortunately, due to weather, the event Mom & Chris were supposed to go to on Thursday, they’re seats have been cancelled. It was Women’s Snowboard Halfpipe. The standing room area is very beat up and not safe enough for spectators. It is quite a bummer, but we shall prevail and overcome.

My first event is tomorrow at the Pacific Coliseum at 5pm for Short Track Speed Skating. Should be fun!

After leaving Coquitlam around 4pm en route to my grandparents’ place for dinner yesterday, we got news there was a bombscare at Lonsdale Quay on a SeaBus, right where my grandparents live. There was Police everywhere! They wouldn’t allow anyone down the hill by car or foot. So, we sat and waited for nearly an hour until they cleared the area as safe. Turns out they blew up a package left by someone on one of the SeaBuses. An inconvienience, but glad they are taking the proper measures to ensure public safety at all times.

Day 8 started around 10am, I have to say, Washington redeemed itself from Day 7. The scenery was magnificent, going through the Rockies with big Pine and Spruce lined roads. Beautiful. Traffic was superb, making it across the border (with no problems) and into Coquitlam by 2:30pm. We’re safe and sound. A big thank-you goes out to my Uncle Craig for coming down and taking the roadtrip with us and lending his helping hand, much appreciated. So now only 1 day until the festivities start. Dinner at Grandma & Grandpa’s tonight.

Day 6 started out leaving around 9:30am. We travelled through the remaining part of Utah, experiencing great weather with the sun shining. The views we saw were phenomenal, cutting through the mountains. Around midday we crossed the state line into Idaho. The weather became cloudy and had a touch of rain, which was ok because Idaho was rather boring landscape-wise. After covering all of Idaho, we entered into Oregon before sundown, settling in Ontario. Day 7 started later, close to 10am, but were fortunate enough to pick up an hour shortly after leaving due to entering the Pacific time zone. We conquered Deadman Pass easily and saw an absolutely breathtaking vista (picture to come soon). Early afternoon we crossed into our final state, Washington. Washington has been quite blah so far, fusing farming and industry into a crazy mix. We are staying the night in a small town almost at the summit of the Snoqualmie Pass (elevation 3,022 feet) called Cle Elum. Tomorrow is the conclusion to roadtrip #1, probably ending up in Vancouver in the early afternoon. 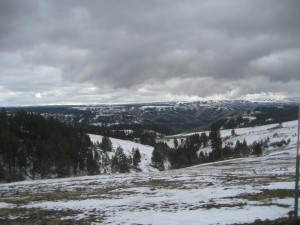 Day 5 started at about 9:45am. We began our day traveling through the mountains of Wyoming along I-80. We stopped briefly for a rest at the Lincoln Memorial, the highest elevation on the entire I-80 at 8,640 feet. The scenery was fantastic along this part of the highway (pardon me, interstate). The rock formations were stunning and the colour a reddish-brown. The landscape returned to more flat, but the Rockies could still be seen off in the distance. The number of windmill farms were surprising, many of them stretching for miles along a ridge. We crossed into Utah just before sundown and settled for the night in Ogden, Utah, just outside of Salt Lake City. We hope to make it to Boise, Idaho for tomorrow night.

Here’s a few pictures the boys sent to my phone yesterday!

Yeup seems Kansas is flat, though the day looks awesome!  So with Colorado brings tasty tasty Orginal Coors (I await my case!), and doesn’t it seem Paul got into er…haha well maybe after Team Canada wins the gold!