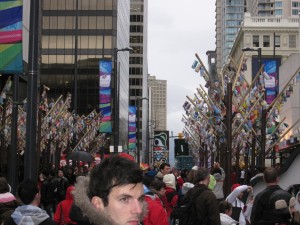 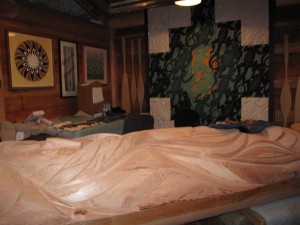 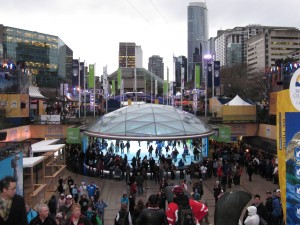 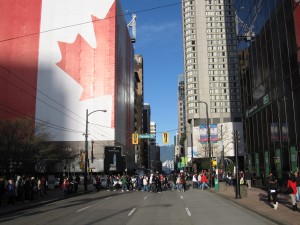 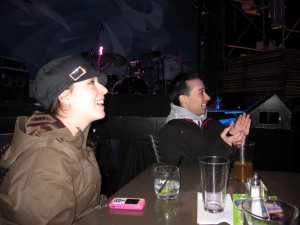 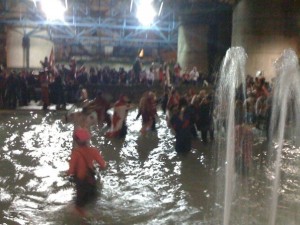 Entering the final day of competition at the 21st Winter Olympics, Canada had 13 Gold medals, a tie for the most by not only the host nation, but by a country ever at a Winter Olympics. Canada would surpass this mark and set records this day, and do it in style!

This day was like many others when Team Canada played hockey, we settled into our spot at the local watering hole in Coquitlam, the John B Neighbourhood Pub. Joining me for this exciting and memorable day was my dad, my brother, my cousin Ken, my cousin Monique and her boyfriend Jeff, her dad Albert, and her grandpa (my grand uncle Johnny). A good crowd if I do say so myself! The pub was packed with everyone in their Canada gear.

Once the game started at just after noon, everyone was on pins and needles waiting to see if our boys in red and white could bring it home (I guess technically it was “keep it here”). Boy, those guys sure made us tense! As millions across Canada watched, we all had a united “ohhhhh…” as those pesky Americans scored to tie the game at 2 with 24 seconds remaining in the game to force overtime. The 20 minute wait between the 3rd and Overtime was very stressful. Overtime begins, here we go, all on the line now boys. Here’s the setup: Canada comes out guns a blazin’, about 7 minutes into Overtime Canada makes a rush into the Americans’ end, they get it deep and start to cycle the puck, Iginla gets the puck, feeds it to the golden boy Sidney Crosby who fires a shot immediately through Ryan Miller into the net. CANADA WINS, CANADA WINS, CANADA WINS!

Could there really be a better ending to this, almost scripted?

The pub erupted and went absolutely nuts! High fives all around, spontaneous singing of O’ Canada, beer being chugged in true Canadian fashion!

Now back when we got the tickets, I made a promise. The promise was: if Canada wins the Gold medal in Men’s Hockey, I will drink beer. Well, Canada won, so here’s the moment many of you have waited to see for years…

That’s all I drank. Was kind of disgusting. However, it was a free pint of Canadian courtesy of the pub because Canada won Gold. I’ll try beer again, just not Canadian draught.

We then awaited the Closing Ceremonies that evening to conclude the past 17 days.

Canada wins a GOLD! We got our very first gold medal on home soil on Sunday by Alex Bilodeau in Men’s Moguls. The monkey is off our back now, time to get some more. We also recieved a Silver in Women’s Moguls and Men’s Snowboard Cross, and a Bronze in Women’s Speed Skating.

Last night’s concert Chris & I went to was great. We saw City and Colour, otherwise known as Dallas Green. The concert was part of the Cultural Olympiad. The opener was a band called The Rural Alberta Advantage. Both of us quite enjoyed them.

Unfortunately, due to weather, the event Mom & Chris were supposed to go to on Thursday, they’re seats have been cancelled. It was Women’s Snowboard Halfpipe. The standing room area is very beat up and not safe enough for spectators. It is quite a bummer, but we shall prevail and overcome.

My first event is tomorrow at the Pacific Coliseum at 5pm for Short Track Speed Skating. Should be fun!