Now that it has been a few months since this trip took place, I think it has given me ample time to think about our time soaking in the experience that was the 2010 Winter Olympics.

From the time the Games were announced that they would be held in Vancouver, I had this inner desire to attend. This desire was kept to myself for quite awhile. When ticketing information was announced I got a little more excited and brought my idea up with my parents and brother. They liked the idea and said to keep them posted. As the ticketing lottery deadline approached, we had several family meetings to decide what packages and events to try to get. We submitted and waited… we got 4 pairs of tickets; it was official, we were going to the Olympics! However, 4 pairs didn’t seem like enough for such an international event. So, in June I picked up 4 more pairs via the online ticketing system. That seemed perfect! As time ticked away and the Games grew closer, our excitement mounted exponentially too!

Once there, we became glued to the TV watching the coverage or were visiting with family or taking in the electric buzz that permeated through Vancouver or were experiencing world-class athletes compete live.

Not enough can be said about the feelings and emotion the Olympics brings to an individual. Words will never do it justice and must be felt first hand to truly understand. If anyone ever has the opportunity to experience the Olympics, Winter or Summer, do not pass this up.

The hospitality we were shown by our family and friends made this trip even better, thanks!

People have asked me “how was it?” countless times since I’ve been back and my answer I give them is “trip of a lifetime”. This is the answer that I think sums up my emotions best. Will there be another “trip of a lifetime”? Possibly. This will be hard to beat, but if the Olympics are in North America again, I’ll probably be there to cheer Canada on wearing the red and white. That’s a promise.

I put together a video that showcases our trip put to music by Vince Vaccaro, a local BC musician, and Foo Fighters, my favourite band.

Until next time, its been great sharing my stories with you, thanks again, so long…

After leaving Coquitlam around 4pm en route to my grandparents’ place for dinner yesterday, we got news there was a bombscare at Lonsdale Quay on a SeaBus, right where my grandparents live. There was Police everywhere! They wouldn’t allow anyone down the hill by car or foot. So, we sat and waited for nearly an hour until they cleared the area as safe. Turns out they blew up a package left by someone on one of the SeaBuses. An inconvienience, but glad they are taking the proper measures to ensure public safety at all times.

It is the last day before departure and it doesn’t seem real yet. The motorhome is parked out front and being loaded as I type. Dad and I still need to pack, but that’ll only take a short bit. Mom is getting last minute provisions at the store. I thought about wearing my Team Canada jersey as we cross the border, but after watching this TV ad, Dad has said a definitive “NO!”

Departure is approximately 8am tomorrow morning. Hope to make it to Indianapolis tomorrow night. We shall see…

Bon voyage! Next time you hear from me, we’ll be on our way.

We’re about to enter the final week of preparation for our drive. Wow, it’s happening! Thanks though to the Yanks, we can’t do as much shopping ahead of time as we would like. They have strict guidelines that’s for certain. For instance, no poultry or poultry products (even Campbell’s Chicken Noodle Soup), no potatoes, no fruits or vegetables (unless you want to waste time getting each and every item inspected…), no rice, no eggs, plus other things. Insane if you ask me. Needless to say, once we cross over into Helter Skelter Land, we’ll have to shop.

Craig’s flight comes into Toronto at 7am-ish on February 1st, we’ll pack that day, then hit the road February 2nd at 8am-ish. Now have to sync the iPhone for music. More to do this week.

Only 19 days until the start of the Games and for the fun to begin!

On the morning of December 22nd our precious tickets arrived via Purolator courier. The tickets are quite large and are collectibles. I guess this means we’re going right? 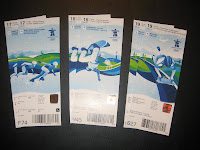 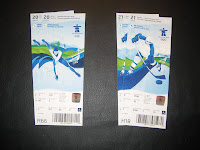 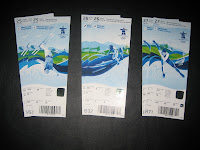 So with 29 days till opening ceremonies, we’re all getting a little itchy…

Today the Canadian hockey team jerseys were unveiled, and damn do they look SWEET! The logo has changed and is no longer the Hockey Canada logo that was used for the last 14 years of international play. Within the central maple leaf crest there are smaller maple leafs, symbolizing the gold medal count for Canada’s men’s and women’s Olympic ice hockey and Paralympic ice sledge hockey teams. Other symbolism includes a hockey player with a stick in hand and two powerful First Nations icons — the thunderbird and eagle — supporting the central maple leaf. I am for sure getting one of these!

With a suggested retail price of $135, the Team Canada 2010 Olympic replica jerseys are available today in Nike stores across Canada, The Olympic Store at vancouver2010.com, Hudson’s Bay Company Bay stores, and later this fall at Olympic Stores in Vancouver, Whistler, and the Vancouver International Airport. They will also be sold in the Olympic Superstore at the Bay Downtown Vancouver and hockey venue concession stands operated at Games time.

Here’s 3 pictures of them:

As soon as Vancouver won the bid to host the Winter Olympics, I had this dream to attend. To bring you up to speed:

We’re continuing to work out details as far as accommodation and transportation goes. Currently, we’re looking into buying a motorhome to drive out and back in.